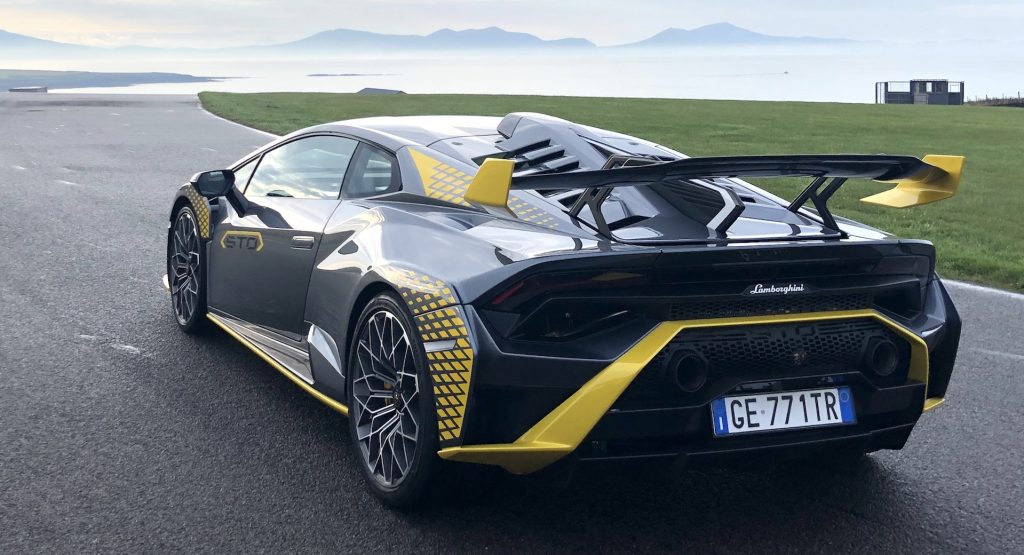 Lamborghini’s Huracan is approaching its twilight years. Come 2024, a full decade after it was launched, it will replaced by a brand new supercar complete with turbocharged V8 power, hybrid assistance and a silent EV city mode.

In some ways, it can’t come soon enough. Next to supercars like the Ferrari F8 Tributo, the standard V10 Evo emits too many noxious gases and not enough horses. With every passing year it feels more like a dinosaur. But it also gets more and more exciting as the number of naturally aspirated mid-engined sports cars dwindles to er, well, can you name many credible rivals in the $300k bracket that aren’t turbo-powered?

And no production Huracan road car is as exciting as the new STO. Maybe no Lamborghini full stop, and that includes the Aventador SVJ. It doesn’t try to paper over the cracks in the Huracan’s decade old design; instead, it just creates the mother of all distractions, hoping you’ll forget they’re there.

STO stands for Super Trofeo Omologato, a name that tells us this Huracan halo model transfers lessons Lamborghini learnt from both its Super Trofeo one-make racing cars and the Huracan GT3 Evo competition cars, the GT3s having collected more cups than a Starbucks barista, including at the Daytona 24 Hours which they’ve won three times over.

Related: Someone Already Crashed A Lamborghini Huracan STO – And It Was A Rental 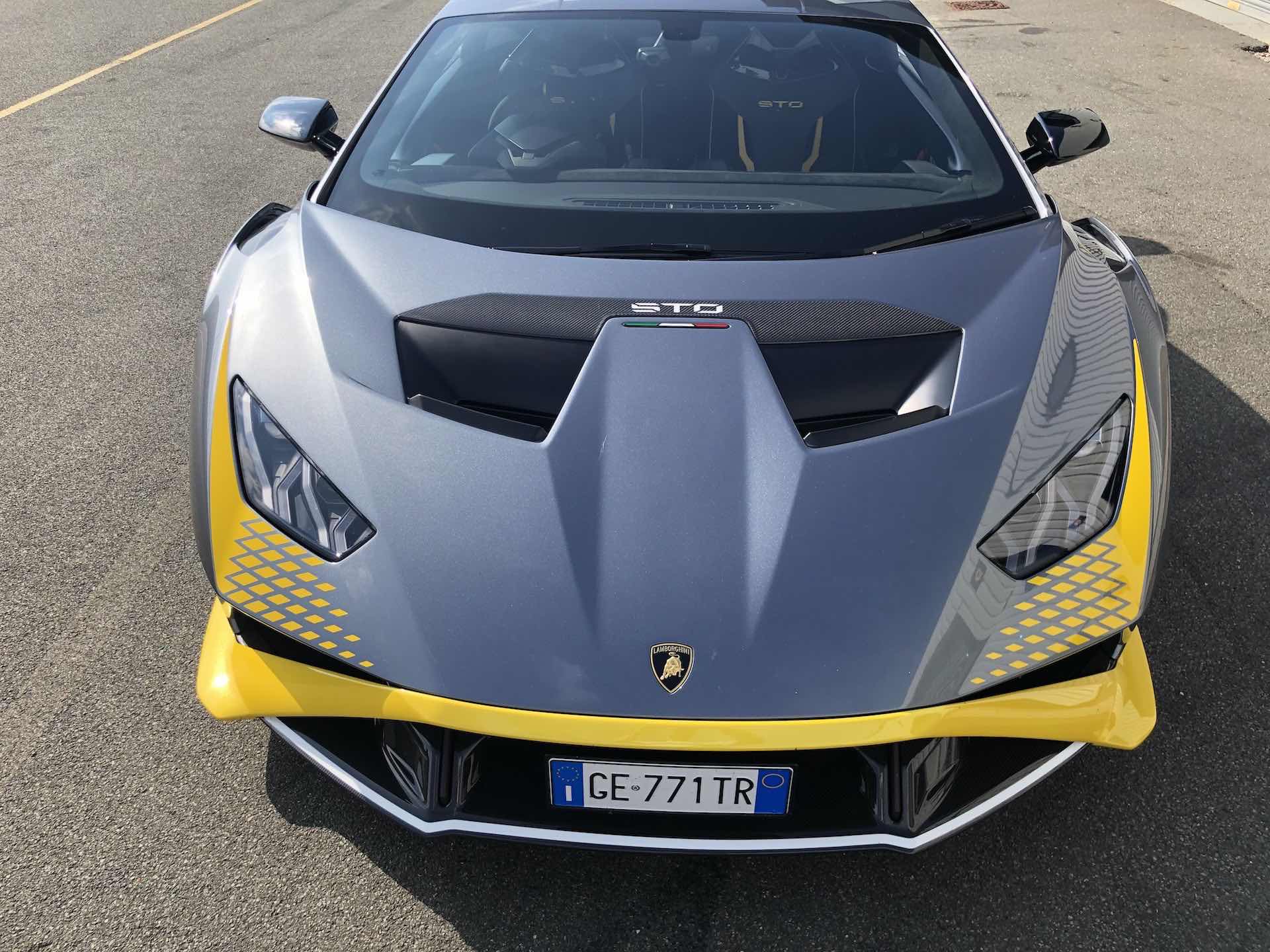 We’ll get to some of the detail differences in a second, but the main thing that differentiates this new extreme Huracan from the older Performante it effectively replaces is that the STO only sends its power to the rear wheels. Previously, the only two-wheel drive Huracan was the base-model Evo. That RWD Evo costs $206,485/£164,400, but the STO is priced at $327,838/£260,012. That’s one serious up-sell. 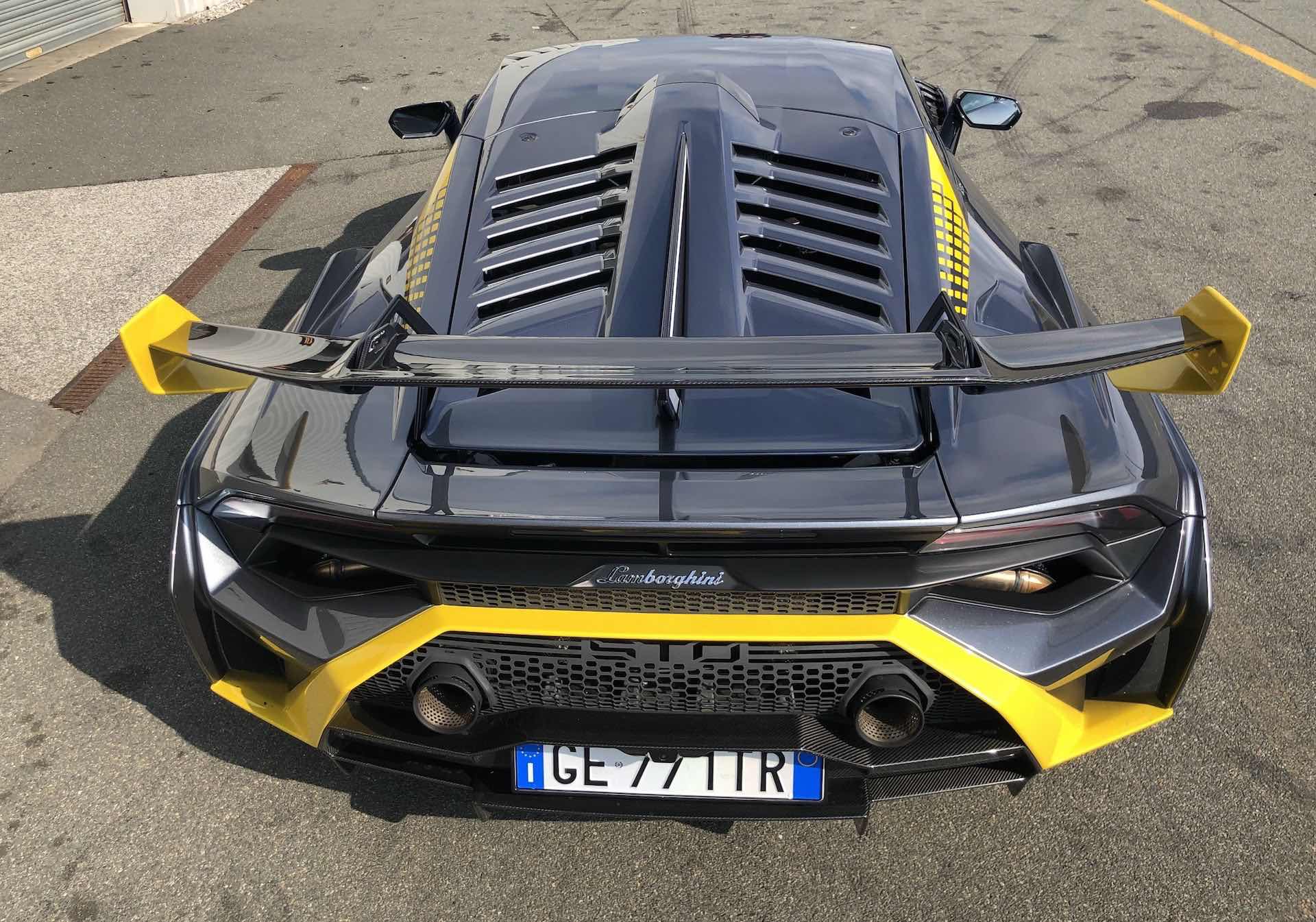 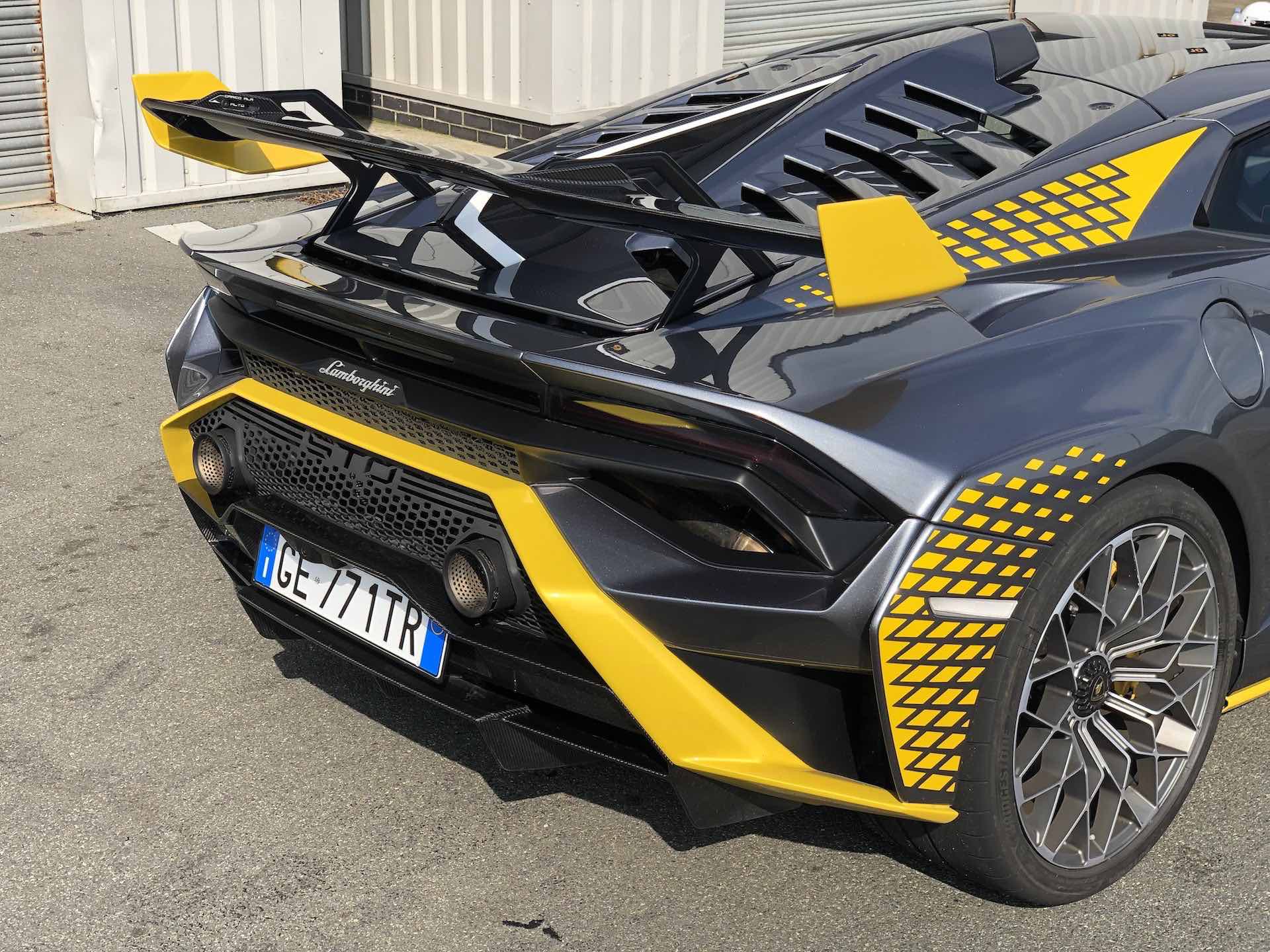 Dropping those front driveshafts and associated transmission hardware, plus making the front bodywork into a flip-up one-piece clamshell, is largely responsible for a 95 lb (43 kg) drop in weight versus the Performante to 2952 lb (1339 kg). That’s one of those sneaky supercar ‘dry’ figures measured without fluids though, and probably equates to around 3172 lb (1339 kg) at the curb, measured while stationary. At 175 mph (281 km/h), on the other hand, there’s up to 926 lb (420 kg) of additional mass pummeling the tires into the ground thanks to the aggressive aero kit, which is visually dominated by a central dorsal fin and manually adjustable rear wing. 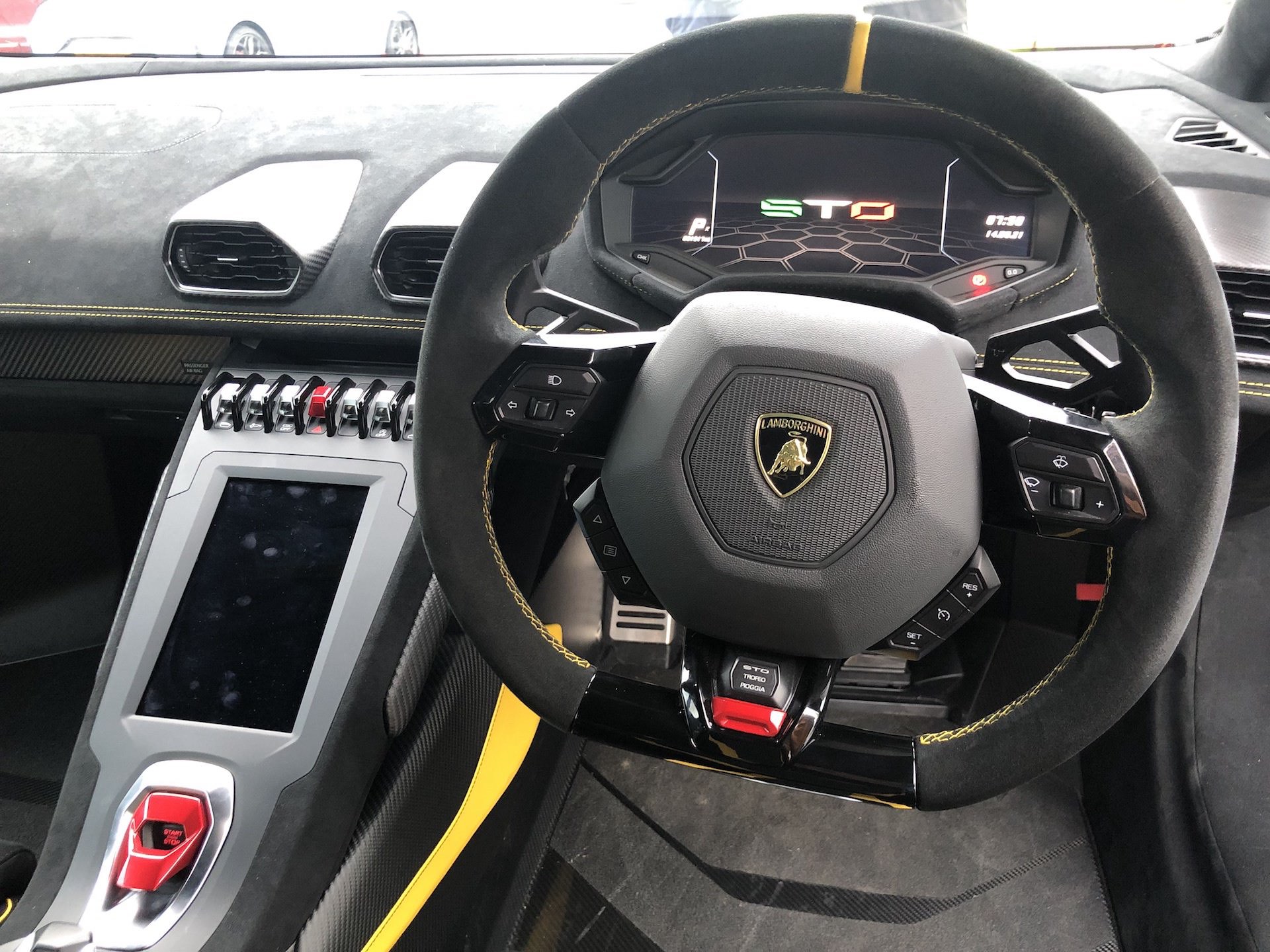 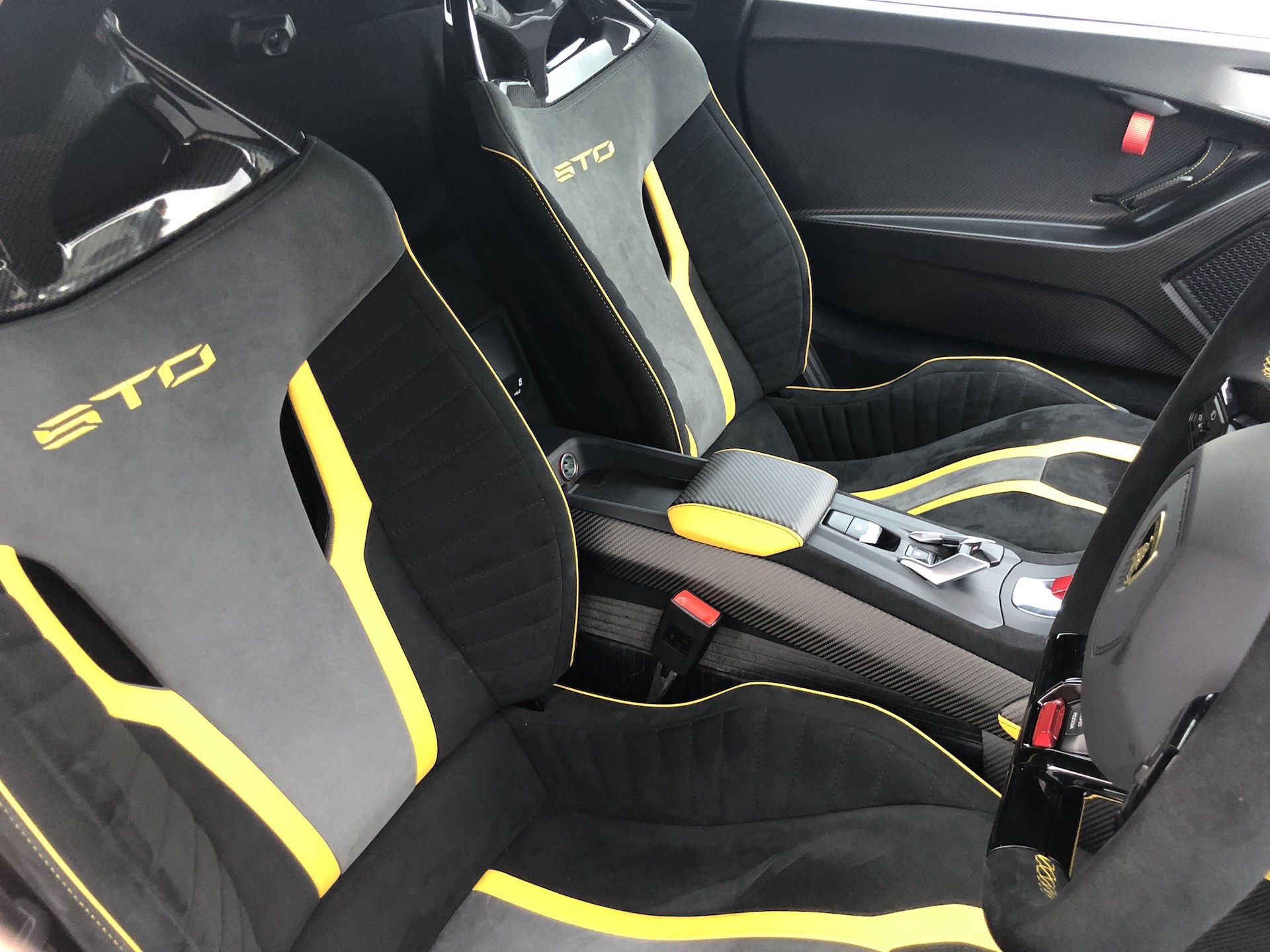 Tug the door open and you’re greeted with a cabin that’s every bit as single-minded. There’s no carpet but plenty of carbon fiber and Alcanatara, which together cover almost every surface not required for seeing out of. The bucket seats are firm and supportive, but not so aggressively shaped as a Porsche 911 GT3’s optional carbon chairs, and the wide, flat expanse of front glass delivers a true 1970s supercar experience that’s nothing like the one you get from the STO’s McLaren and Ferrari rivals.

Last Of The V10 Interceptors

Crank the V10 into life with a prod of the button beneath the flip-up cover and the analogy continues. On paper, the STO looks way off the pace. Its 631 hp (640 PS) output is no more than you got in the old Performante, and a massive 124 hp (126 PS) down on the 765 LT, its opposite number at McLaren. Even the basic grocery-getter Ferrari F8 Tributo makes 710 hp (720 PS), and we’d expect 30-hp more from its Pista/Speciale offshoot when it arrives. 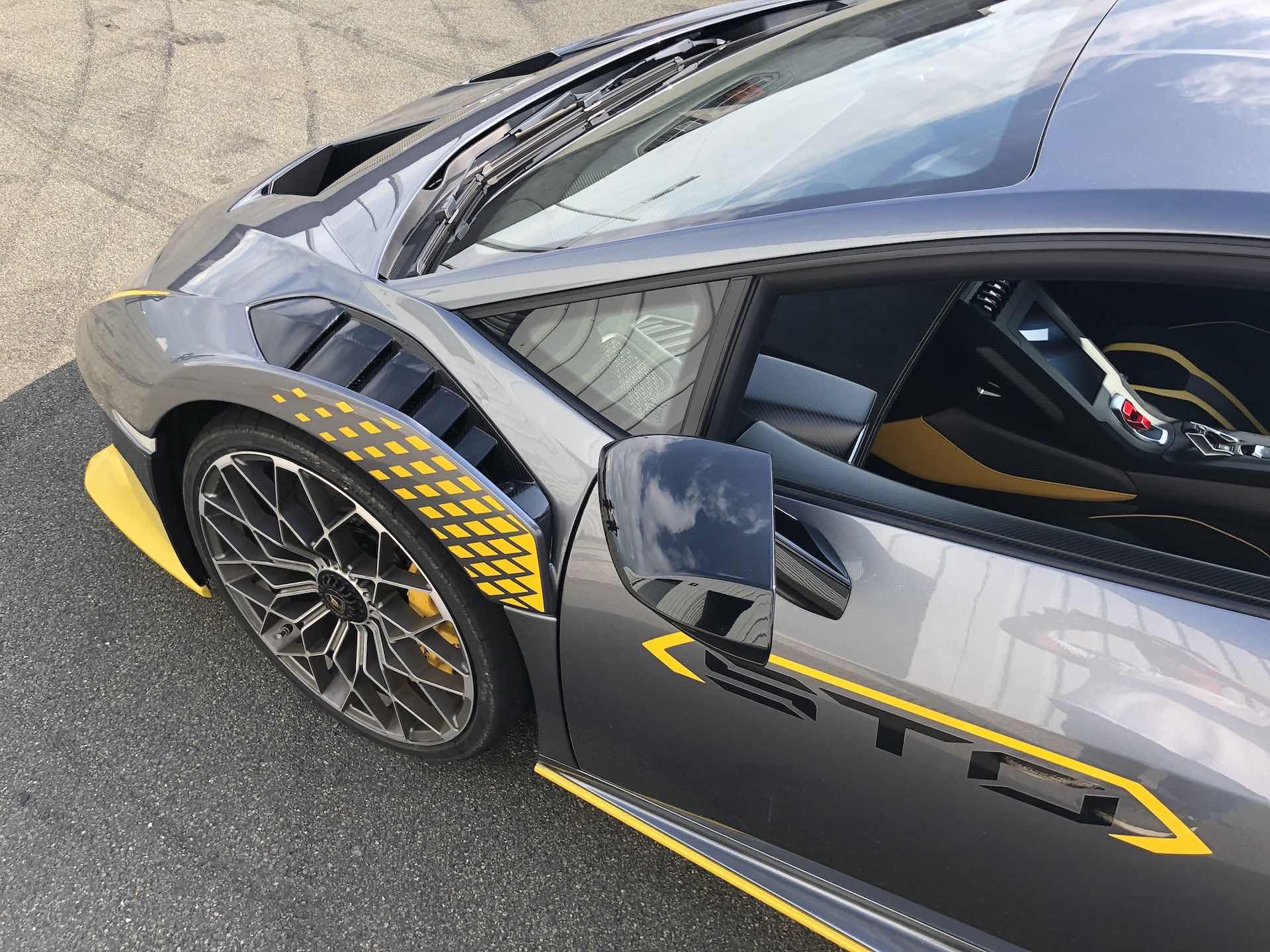 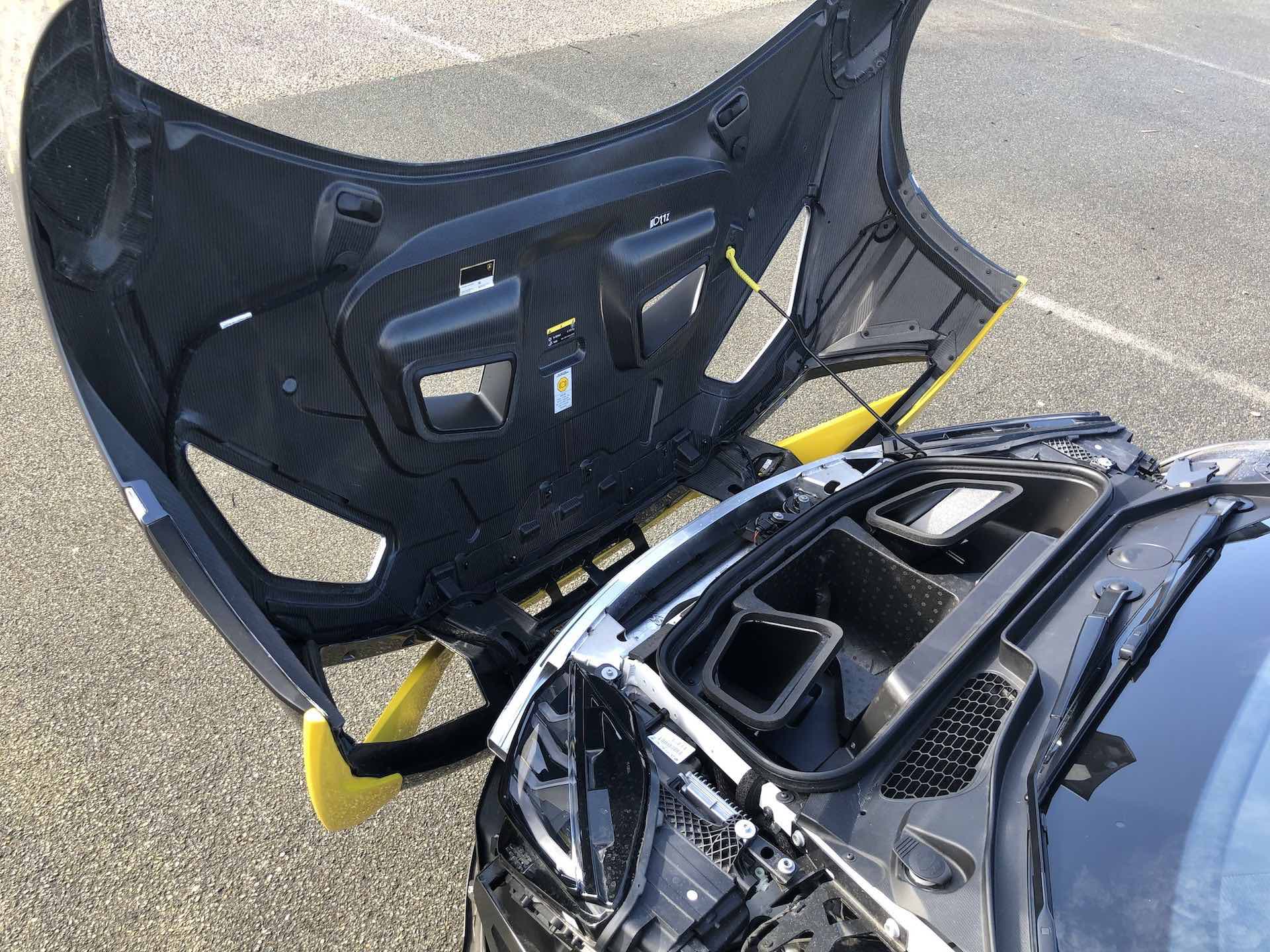 The torque differences are even more pronounced. The STO produces 417 lb-ft and makes you wait until 6500 rpm for the 417th. It actually makes 26 lb ft less torque than the old Performante, while a 765 LT provides 590 lb ft and serves it up 1000 rpm earlier. But believe me, you won’t care. In fact, you might argue that those details work in the STO’s favor. For starters, it’s more than fast enough. Zero to 62 mph (100 km/h) takes 3.0 seconds and 0-124 mph (0-200 km/h) is dusted in 9.0 seconds. Sure, a 765 LT is quicker still (2.8 seconds and 7.0 seconds respectively) and feels far more savage, but your opportunities to make use of the Macca’s extra kick are rare, and anyway, I’d probably trade a few of the McLaren’s tenths for the Lambo’s naturally aspirated yowl, or its lag-free throttle response.

Related: Lamborghini Reportedly Working On A 2+2 EV, Could Arrive By 2027

On the flip side, good as the STO’s steering is, I think the 765’s has the measure of it for weight and feel. The Lambo’s gigantic A-pillars, which seem like they’re disappearing off to meet the headlights, also make it harder to place on the road and track, and the driving position isn’t as snug as the McLaren’s either.

Home Is Where The Track Is

But it feels incredible on track, almost unrecognizable from the original Huracan I drove on the press launch in 2014. Though kit like a dual-clutch transmission and adaptive dampers gave that first Huracan the kind of refinement its Gallardo predecessor never offered, driven hard it just a felt a little too sensible, too understeery, and not as agile as its then elderly Ferrari 458 rival.

But the STO hasn’t even heard of understeer, turning in smartly almost regardless of how over-optimistic you are with your entry speed. Not that you’ve got any excuse for that kind of behavior: the standard-fit carbon ceramic brakes are monstrously powerful, though the light pedal effort required takes some getting used to. 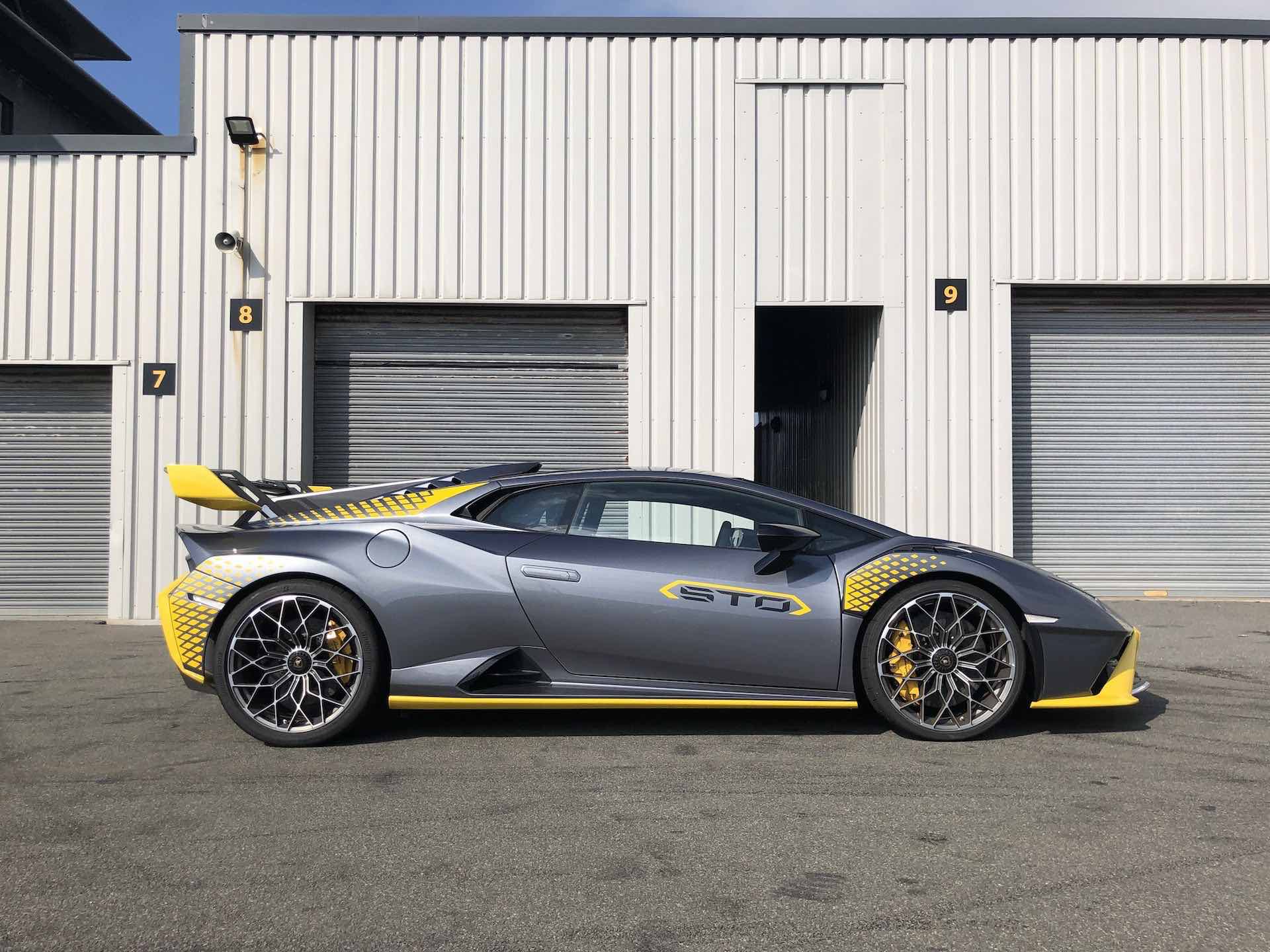 Being rear-wheel drive, there’s the option, of course, to tease the car into some huge showboaty slides if you’re on a race track with enough space. But for the most part, and certainly at road speeds, it feels reassuringly planted due to a combination of its sticky Bridgestone rubber and the various aero aids. This is a race-inspired car, after all, and in most motorsport disciplines, keeping things neat keeps you out in front.

Those competition genes also mean it’s noticeably firmer and noisier than a standard Huracan Evo on the street, and the new louvred rear panel means rear visibility goes from bad to worse. But it does retain air conditioning and the standard car’s console infotainment system that now features extra track-specific data options. 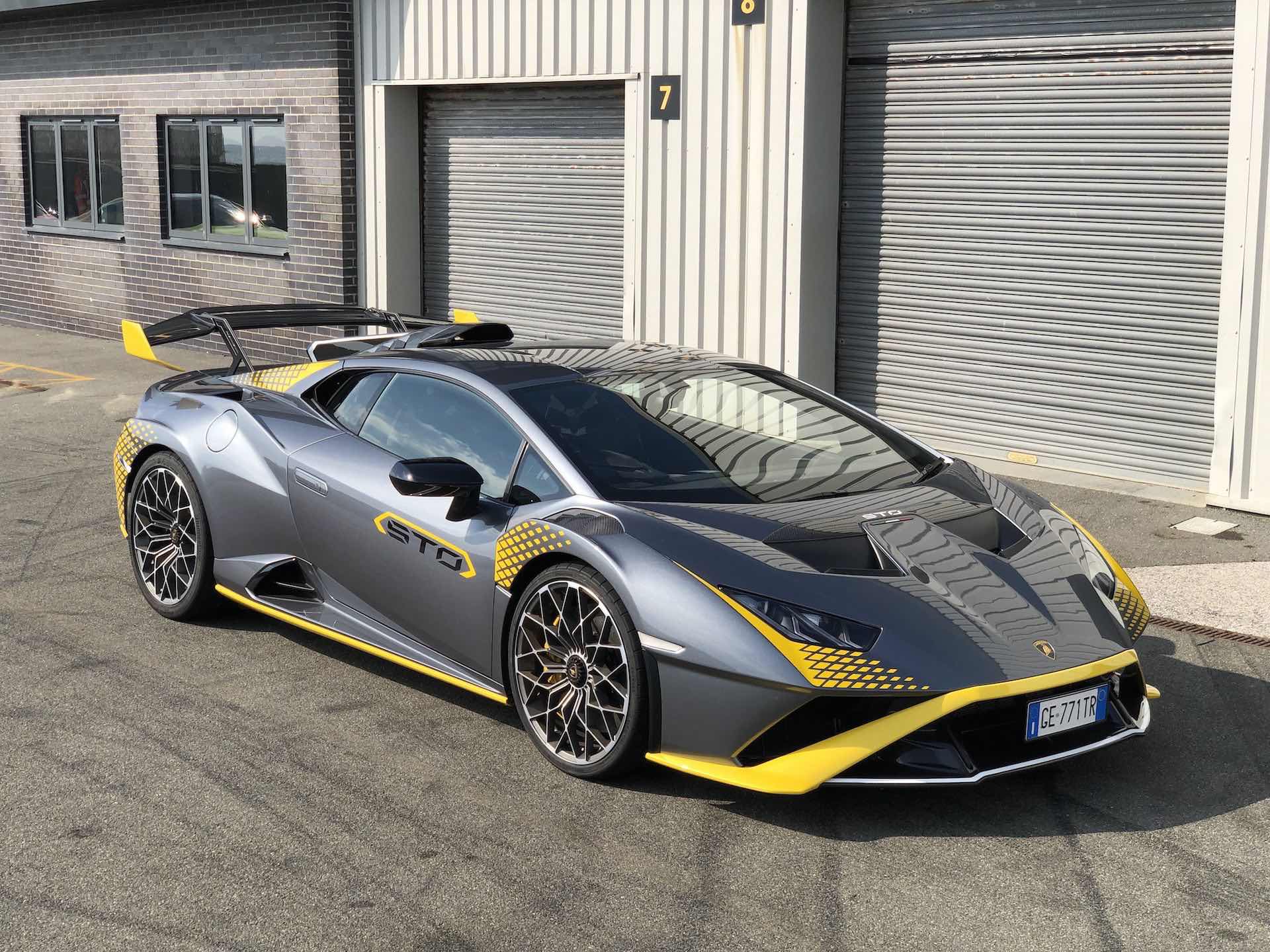 Seven years later, after significant updates including the addition of four-wheel steering, the base Huracan has matured into a great supercar, and one whose naturally aspirated V10 gives it a genuine USP. It’s also arguably massively better value than the STO. However, the STO delivers an experience you can’t get from a stock Huracan, good as it is. You can buy faster, more powerful cars for the same money, and you can certainly buy track-focused cars that are easier to live with on the road. But if you’re looking for a car that delivers intense EpiPen-like shots of adrenaline in short bursts, which is arguably what supercars are all about, the STO is up there with the very best, including its Aventador SVJ big brother.

H/T to Car Magazine, who invited me to their annual PCOTY event where I had the chance to thrash the STO around Anglesey Circuit.